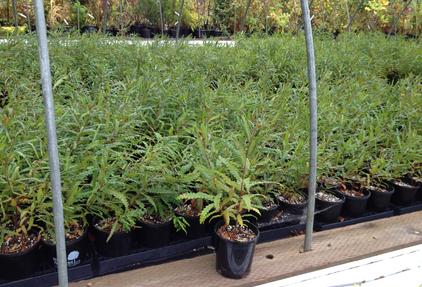 Sweetfern is a plant that’s ideally suited for some of the toughest landscapes conditions we encounter. Comptonia peregrina is a woody shrub native to all of USDA Zones 2 to 6 in eastern and central North America, reaching 2-4 ft. high, but spreading much wider with its underground rhizomes. You’ll see colonies of it thriving in barren, acidic, rocky soils, established as a dense thicket in sunny areas where the ground has been disturbed like highway embankments, the edges of gravel pits, utility rights-of-way and road cuts.

It is easily recognizable in every season. During winter, the hairy, reddish-brown upright stems hold some of last season’s withered leaves along with prominent tassels of flower catkins. In early spring pale-green foliage appears from expanding buds along each stem, soon expanding and darkening to create a rich-green carpet for the summer. Underground roots reach out at the edges of the colony and new shoots emerge each spring as the thicket broadens to resemble a lacey grove of miniature trees. Sweetfern’s fine-textured summer foliage contrasts attractively with bolder-leaved plants, and its distinctive aroma is best enjoyed where it receives afternoon sun during the summer.

Sweetfern is an excellent choice for naturalizing and mass plantings in sites where “normal” landscape plants tend to perform poorly, like parking lots and along roadways. Its solid root system holds the soil effectively and helps prevent erosion on steep slopes and bankings. Because it matures at 4 ft. or less, it is a fine “facing-down” option for planting under trees and leggy shrubs in sunny situations. In the herb garden its summer leaves can be harvested and dried for making tea. But Sweetfern does not appreciate being pampered: in moist, rich and more fertile soils, competing plants grow more vigorously and can overwhelm it.

Even though it’s not actually a fern, that common name comes from the fern-like appearance of its lacey dissected leaves. The “sweet” part of its name derives from the pungent clean-spicy fragrance of its foliage, lingering on the summer air on hot sunny days; the aroma can be enjoyed even in autumn and winter by crushing its persistent frost-browned leaves. Some people even report that the scent of the foliage is effective repelling insects like mosquitos and black flies.

Perhaps Sweetfern’s most compelling attribute is its unique ability to partner with a special bacterium to convert atmospheric nitrogen into a form that plants can utilize for growth. This feature enables it to thrive in impoverished soils and tolerate conditions other plants cannot. You can see the mechanism supporting this nitrogen-fixing process as bumpy nodules along each root. The nitrogen converted by these root nodules passes along to other plants underground, and also enriches the soil as Sweetfern’s fallen leaves decompose.

Sweetfern is difficult to propagate from seed, so many garden centers do not carry it, except on special request. And if enough people ask for it, perhaps it will develop the popularity it deserves for fulfilling such a necessary function for many landscapes.